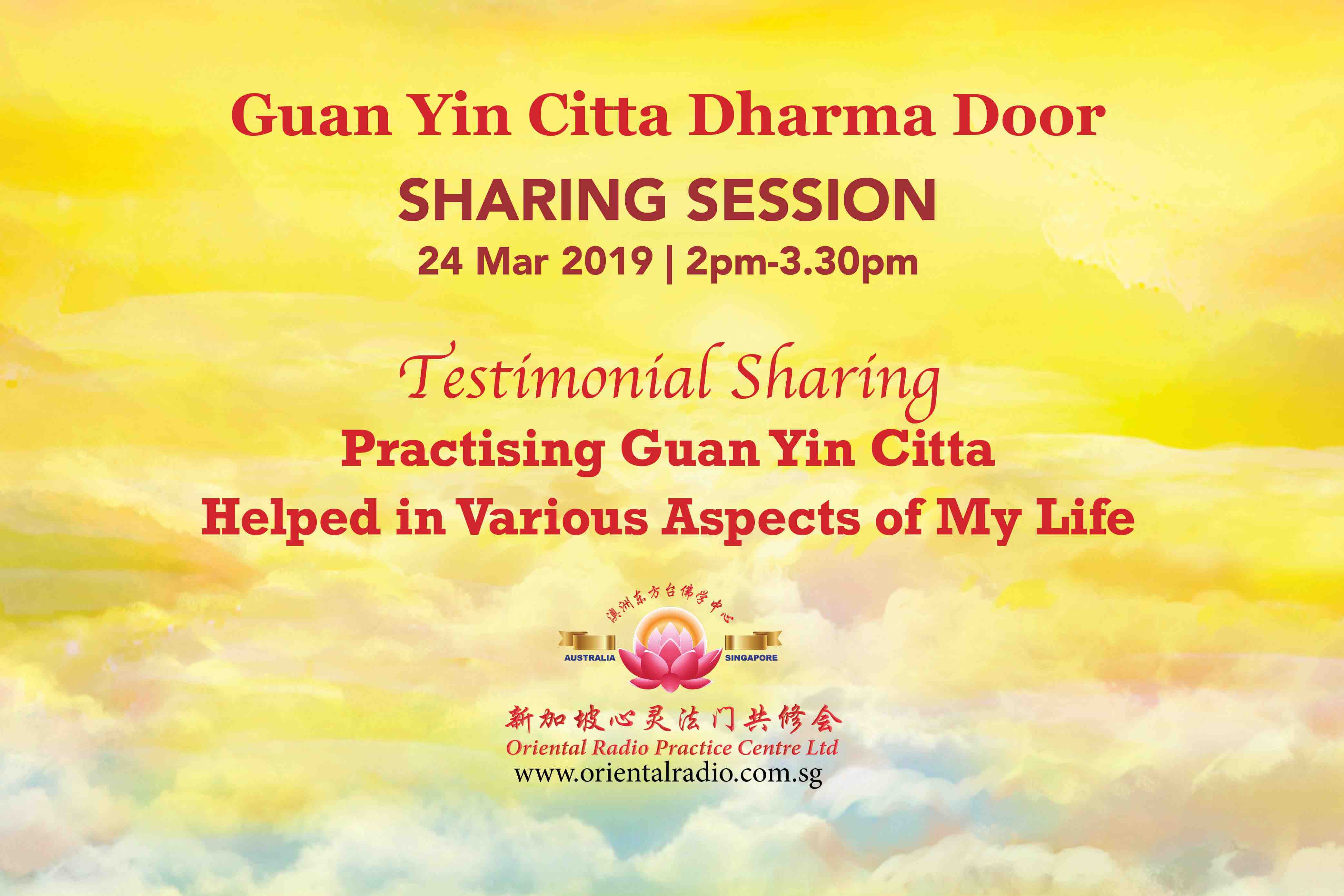 Deepest gratitude to All Buddhas, Bodhisattvas and Heavenly Dharma Protectors!

Today, I am going to share my experience on how cultivating with Guan Yin Citta Dharma Door has helped my daughter to successfully gain admission to her ideal secondary school.

If there is any unrighteousness in my sharing, I would like to seek forgiveness from the Greatly Merciful and Greatly Compassionate Guan Yin Bodhisattva, all Buddhas, Bodhisattvas and Heavenly Dharma Protectors.

I first attended Master Lu’s public talk in 2015.  Soon after attending the talk, I dreamed of my aborted child.  In the dream, it was instinctively clear to me that it was my child. After having the dream, I thought it was really miraculous for my child, who was aborted many years back, to appear in my dream right after I attended the public talk. In the same year, my elder daughter was going to take her grade 5 piano theoretical test. Prior to the test, her piano teacher asked her to do a mock test and she did badly. After viewing her script, her teacher told me, “With her results, she is likely to fail the test. Please be mentally prepared.”

Though I am aware that my daughter is not one who is hardworking, but after spending so many years and putting in so much effort to learn piano, I was reluctant to give up the opportunity.  Suddenly, it struck me that someone told me before, that we could pray for better academic performance by reciting the Heart Sutra and Cundi Dharani. As such, I started reciting Heart Sutra and Cundi Dharani alternately for my child outside the examination venue for almost two hours. The instance really seems like embracing Buddha’s feet in one’s hour of need. The passing mark for the test was 100 and my daughter managed to scrape through the test with a score of 101.  Even her piano teacher was in disbelief and thought she had misread the score. In my heart, I was filled with gratitude for the blessings from Bodhisattva.

One day, not long after my child’s result release, I felt a sudden pain on my lower back and was soon diagnosed with shingles.  The pain was so unbearable that I was bed bound for two to three days.  I have always been healthy and hardly fall ill. The sudden illness caused much miseries for me and made me felt profoundly about the impermanent of life. Coincidentally, the Buddhist friend who helped me, called me to chat.  After knowing my situation, he reminded me that there will be no merits if I do not perform recitation diligently.  He explained that the act of praying for my daughter could have expended my merits, thus causing me to fall ill. This made me realised that I have to perform recitations diligently for speedy recovery and to prevent the same situation from recurring again. From then on, I started performing recitations daily and was quick to recover from my illness.

During then, my state of mind was relatively low; I was worried that I would be in trouble if I have to bear the karmic consequences of praying for my daughter, who will be sitting for her Primary School Leaving Examination (PSLE) soon. Therefore, I persisted and have not stopped performing recitations even after I have recovered from my illness. I prayed to Bodhisattva to help my daughter get into Nanyang Girls’ High School and made a vow on my daughter’s behalf to recite 21 Little Houses, liberate 1,000 fishes, donate $300 to print dharma books and to share my experience if she could be admitted to the school. I had also requested to transfer half of my merits, amassed from volunteering in April’s public talk, to her. Subsequently, fellow Buddhist friends from the practice centre advised that since I am reciting for my daughter, I should purify my mouth by abstaining from non-vegetarian.  Therefore, I made another vow to practice vegetarianism for 3 months.

On August 2016, I participated in the public talk held at Malacca and was lucky to be picked for totem reading. Master Lu was really impressive. He asked whether did I consume 1 fish per day during my pregnancy, and I said, ‘yes’. Next, he said he could tell that I am practicing vegetarianism now; this happened to coincide with the period when I was on vegetarian diet for 3 months. Later my Buddhist friend asked whether do I dare to revert back to non-vegetarian diet since Master Lu had already pointed out that I was practicing vegetarianism? I relented and make a vow to be a vegetarian. Looking back, I felt that my daughter has been my positive infinity as in order to help her, I was propelled to perform recitations and to practice vegetarianism. During the public talk, I asked Master Lu whether my child would be able to get into her ideal secondary school.  Master said that she was playful, but would still be able to get in.

In November, sometime before results release, I had a dream.  I dreamed of my daughter telling me that she had an aggregate score of 260.  I told her she would not be able to make it for Nanyang Girls’ High School, but should be able to get into Dunman High School. In my dream, I was thinking Dunman High School was placed as our second choice because it was slightly nearer to our house and school fees were cheaper.  Thus, I thought admitting to the school would be fine too. Miraculously, on the day of result release, I found out that my daughter scored exactly 260 points, which matched the score in my dream! In that year, the cut off point for admission into Nanyang Girls’ High School was higher and she fell short of the requirement.  However, she was admitted into Dunman High School, just as indicated in my dream.

After my daughter was admitted to Dunman High School, she was very satisfied and was glad that she did not join the Nanyang Girls’ High School. This was because she heard from her friends that it was extremely stressful to study at Nanyang and she is one that dislikes studying mechanically.  She was happier with the ambience of Dunman High School. During totem reading, Master Lu mentioned that she was able to get into her ideal secondary school, but not the one listed as first choice. Now, it seems like this is the best arrangement as preplanned by Bodhisattva. It’s just that I only get to realize how ignorant I am a little too late.  With regards to my child’s school selection, it was apparent that Dunman High is more suitable, and Bodhisattva had already helped with the pre-arrangement. I sincerely seek the forgiveness from Guan Yin Bodhisattva, all Buddhas, Bodhisattvas and Heavenly Dharma Protectors for delaying 2 years before I share my experience with everyone.

In addition, I would like to share 2 other incidences of my personal experience. The first incident happened during Lantern Festival in 2019 where I dreamed of a clock after my video call with my father.  According to the reply from 2OR, the dream indicated that something may happen, and I need to make it haste as time is running out. Not long after, my mother told me that my father was diagnosed with lung infection, and it was causing him to have breathing difficulty.  He needed to be treated urgently and was hospitalized. This happened to coincide with my father’s 73 years old karmic passes. At that instance, I immediately made a vow to liberate 10,000 fish, recite 300 Little Houses for my father, and to share my experience after his recovery. On the following day, I went to Malaysia to liberate 1,000 fish for my father. On the very day, my father was transferred from emergency room to intensive care unit. On the 3rd day, I sought help from a Buddhist friend from my home country, to liberate 5,000 fish for him.  After about 6 days of treatment in the intensive care unit, his condition was brought under control and he was transferred to the general ward. He stayed in there for 2 days and was told that he could be discharged thereafter. The entire saga, from the time he was admitted till he was discharged, only took 9 days. I was truly grateful towards Guan Yin Bodhisattva.  I am also grateful towards Master Lu for enabling me to make use of the Guan Yin Citta’s four golden Buddhist practices to help my father overcome the catastrophe.

The second incident was related to my job search. From last December, there were some changes to my job.  I have always wanted to work for government school, thus, I resigned from my previous job to focus on search for job opportunities with the government school. Although I went for three interviews and passed the initial test, however, due to various reasons, I failed to get further notification from the head office. The repeated failures posted a great challenge to me and I do not know what was the cause of it.  In the midst of it, I asked myself could it be that Guan Yin Bodhisattva would like me to taking a longer break and make use of the time to cultivate spiritually to eliminate my karmic obstacles before I start to work. Therefore, I make another vow to recite 49 times of the Eighty-Eight Buddhas Great Repentance to help me find a job successfully. I would recite the mantra once per day. Two days after making the vow, I made it through the interviews of two schools and accepted the offer from a private school, which was deemed as most suitable for me at the time.

Finally, on last Friday, I received a notification informing me that I have been accepted by the government school.  I was exhilarated and yet at the same time, I was worried about how to account to the private school that made me an offer, since I have already entered into a contract with them and agreed to commence work on 1st April. I was worried about the difficulties, such as monetary compensation, associated with dispute over the contractual agreement. However, on the same day, I received a call from my friend and we talked about how to deal with the situation.  I asked my friend to help recommend someone to take over my position with the private school. I have only one week left, yet my friend told me that she has a suitable candidate to replace me as the office is very near to her house and she is able to start work immediately, assuming she pass the interview (note that usually company would require staff to serve one month notice upon tendering their resignation).

On the same day, I sent a message to the principal informing her that I am unable to join their school. Prior to sending the message, I recited the Mantra to Untie Karmic Knots to resolve the problem. The principal replied that she was disappointed as the school had already informed parents about my recruitment. Though the principal was fine with my decision, but I can’t help feeling guilty. Subsequently, I told the principal that I have recommended a teacher to them and she was grateful for that.  I was glad that the teacher passed the interview, finally the issue was resolved. I felt strongly that all that happened were preplanned by Bodhisattva.

Deepest gratitude to Guan Yin Bodhisattva for her compassionate blessings. Therefore, I sincerely hope that every one of you must believe in the existence of Guan Yin Bodhisattva and that Guan Yin Citta Dharma Door is the best Dharma Door in this time of rapid degeneration; follow the footstep of Master Lu and put to practice the four golden Buddhist practices of Guan Yin Citta Dharma Door, that is, making vows, reciting scriptures, perform liberations and reading the Buddhism In Plain Terms, with the ultimate goal to ascend to the Four Noble Realms.