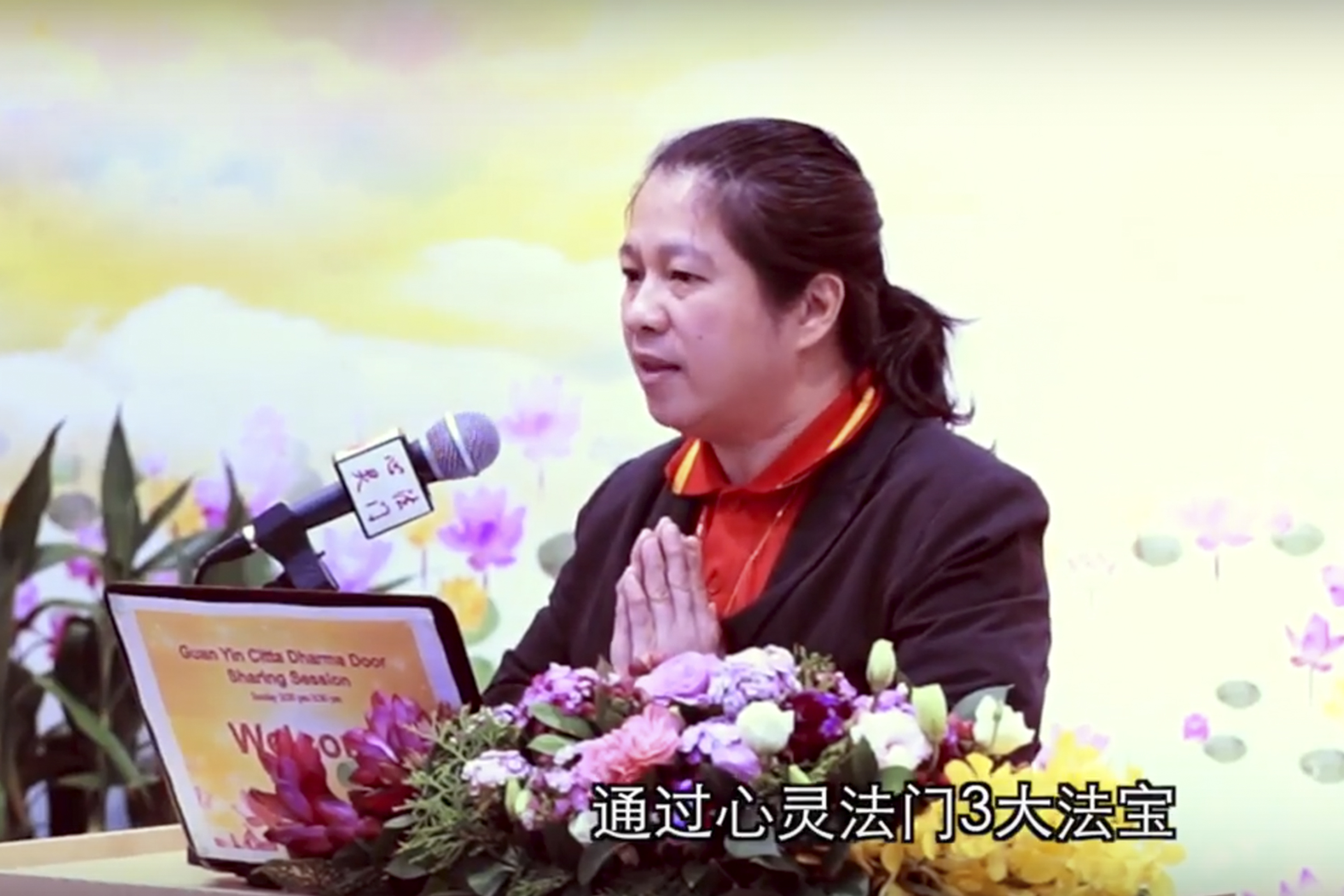 The Three Golden Buddhist Practices of Guan Yin Citta and the meritorious blessing from being a volunteer in Dharma Conventions had miraculously shrunk the fibroid tumour in my uterus.

Deepest gratitude to all Buddhas, Bodhisattvas and Dharma Protectors,

Should my sharing today be improper in any way, I seek the forgiveness of Guan Yin Bodhisattva and Dharma Protectors.

My sharing today is about the inconceivable meritorious blessing from volunteering in Dharma Conventions and how the 3 Golden Buddhist Practices (perform recitation, making great vows and life liberation), have resulted in the fibroid tumours in my uterus to shrink from 10.8cm to 1.8-3.2cm. It has been 6 years now since I started practising Guan Yin Citta through my sister’s recommendation in July 2012. Since then, I have never stopped practising the 3 Golden Practices of Guan Yin Citta (perform recitation, make vows and perform life liberation). Deepest gratitude to Guan Yin Bodhisattva for answering my prayers and granting me a better life and family.

I wish to thank Guan Yin Citta for helping my mother who had suffered all her life. In the later part of her life, she was stricken with Alzheimer’s disease and was physically weak. In 2012, Master Lu commented that my mother had only 2 years to live. Through performing recitation, making vows and performing life liberation, I managed to extend my mother’s life span by 2 years! On 6th February 2016, I managed to call through to Master Lu’s Totem hotline.  Master Lu saw that my mother had almost reached the end of her predestined life span.  I asked if I could see my mother for the very last time.  Master Lu did not give me a clear answer but he advised me to help my mother ascend to heaven, and that I could surely see her then. A week later, on 13th February 2016, my mother passed away.  This goes to show the accuracy of Master Lu’s Totem reading. Please take a listen to the radio recording.

For the past 4 years when my mother was ill, my sister and I had been performing daily recitation, recitation of Eighty-Eight Buddhas Great Repentance, weekly offering of about 10 Little Houses, and monthly life liberation on her behalf in order to extend her life. On a number of occasions, we have also transferred some of our meritorious blessings from Dharma Conventions to her. When she passed away, we offered her more than 400 Little House.  Though she was stricken with illnesses when she was alive, through the 3 Golden Buddhist Practices, she has managed to eradicate much of her karmic obstacles. Through the compassion of Bodhisattva, once again on 12th March 2016, I managed to call in to Master Lu.   Right away, Master Lu saw that my mother had transcended the Six Realms of Rebirth and had become a Bodhisattva. I thank Guan Yin Citta for making it possible for me to fulfill my filial piety duties as being a daughter who resides overseas, it may not have been possible otherwise. Please take a listen to the radio recording.

3 years ago, through practising the 3 Golden Buddhist Practices, my husband, a Buddhist who refused to perform recitation of Buddhist scriptures had finally picked up a mantra book and started performing recitation, including the recitation of Little House. I also managed to have my own Buddhist altar at home. Deepest gratitude to the compassionate Guan Yin Bodhisattva, and Master Lu for his blessings.

Guan Yin Citta has also allowed me to get through a predestined karmic pass; saving me from having to go under the surgery knife. In September 2016, during a routine body check-up, the doctor found a 10.8cm fibroid tumour in my uterus. He recommended that I seek medical attention from a gynaecologist to obtain a more accurate examination as soon as possible. As I have absolute faith that Guan Yin Bodhisattva will always keep me safe and sound, I wasn’t scared and neither did I panic upon hearing this diagnosis. Due to my workload I did not go for immediate medical examination from the gynaecologist. After I resigned from my job, I spent most of my time preparing for the Dharma Convention.  I attended the respective Dharma Conventions in Singapore, Macau, Penang and Jakarta. Surprisingly, in the midst of the hustle and bustle of these Dharma Conventions, the fibroid tumour in my uterus did not cause me any discomfort except for some frequent and urgency in urination.

February 2018: a volunteer from our Practice Centre managed to help me get through to Master Lu’s Totem hotline.  It was unbelievable that Master Lu could see there was a tumour in my uterus right away. He added, even if the foreign spirit would have left, it could have already caused adverse effect to my body.  Hence, it was inevitable that I need to undergo a surgery to have the tumour removed. Please take a listen to the radio recording.

After listening to Master Lu’s Totem program I decided to proceed with the surgery after my participation in the Sydney and Jakarta Dharma Convention in February and March respectively. The Gynaecologist at the National University Hospital arranged for an ultrasound examination for me on 30th May 2018.  Deepest gratitude to Guan Yin Bodhisattva for this arrangement as it has made it possible for me to attend the Singapore Dharma Convention.

1 month before the Dharma Convention, a volunteer dreamt of me. In the dream, I told her that I was feeling unwell.  Also, a day before the Convention, my sister told me that she dreamt of me being unwell. Indeed, on the last night of the Dharma Convention, I suffered from food poisoning. I was puking and purging. Just like how it was depicted in the dream. I reckoned that this was brought about by my karmic obstacles. Because of these 2 dreams, I sincerely prayed to Guan Yin Bodhisattva to help me disperse calamities and keep me safe so that I can accomplish my duty for the entire Dharma Convention. I also made a vow to utilise the merits I accrued from this Dharma Convention to eliminate the karmic obstacles related to my fibroid tumour of my uterus. With the blessings from Bodhisattva and Master Lu, I was able to turn peril into safety. The next morning, to my surprise, I was able to go to work like normal whereas, there are some other dharma friends who suffered the same fate as me were still required to receive drips at the hospital. Deepest gratitude to Guan Yin Bodhisattva. I believe the food poisoning episode has helped to eliminate some karmic obstacles and at the same time help me go through a predestined karmic pass.

Dear Buddhist friends, words cannot describe how wonderful it is to participate in Dharma Conventions. Its effectiveness in eliminating karmic obstacles are many times more than merely performing recitation of Buddhist scriptures. On 30th May 2018, I went for my gynaecological ultrasound check-up. The medical personnel told me that there were only 2 small fibroid tumours left and that I do not need to undergo any surgery. I found it hard to believe until I received the medical report which stated that the tumours had reduced to 1.8 and 3.2 cm and that no surgery was required. Only then, did I feel that the burden was finally off my shoulder. If not for the protection from Guan Yin Bodhisattva, all these would never have been possible. Please take a look at my medical report. 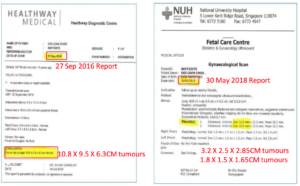 My experience coincides with what was mentioned in Buddhism in Plain Terms Volume 3, Chapter 1 which said:  “Though Buddhas and Bodhisattvas are not able to alter any predetermined karma, however they have the power to transform them”; and how does that work?

Firstly, we have to pray to Buddhas, secondly, we have to pay respect to Buddhas and thirdly, we have to obtain the power of blessings from Buddhas. You should know that predestined karma are hard to alter, as such to do so, the power of blessing is a very important factor.” Without the blessings from Buddhas and Bodhisattvas, and Master Lu, I would never be able to transform my predetermined karma of having to suffer the agony of going under the knife. Deepest gratitude to Guan Yin Bodhisattva for helping me get through this predetermined karmic pass. Do not underestimate the meritorious blessings accrued from attending Dharma Conventions. Guan Yin Citta is true. Deepest gratitude to Guan Yin Bodhisattva for her compassion in saving sentient beings in this Age of Dharma Decline; using the power of Little House to repay our karmic debts and eliminate karmic obstacles.

Deepest gratitude to all Dharma Protectors,