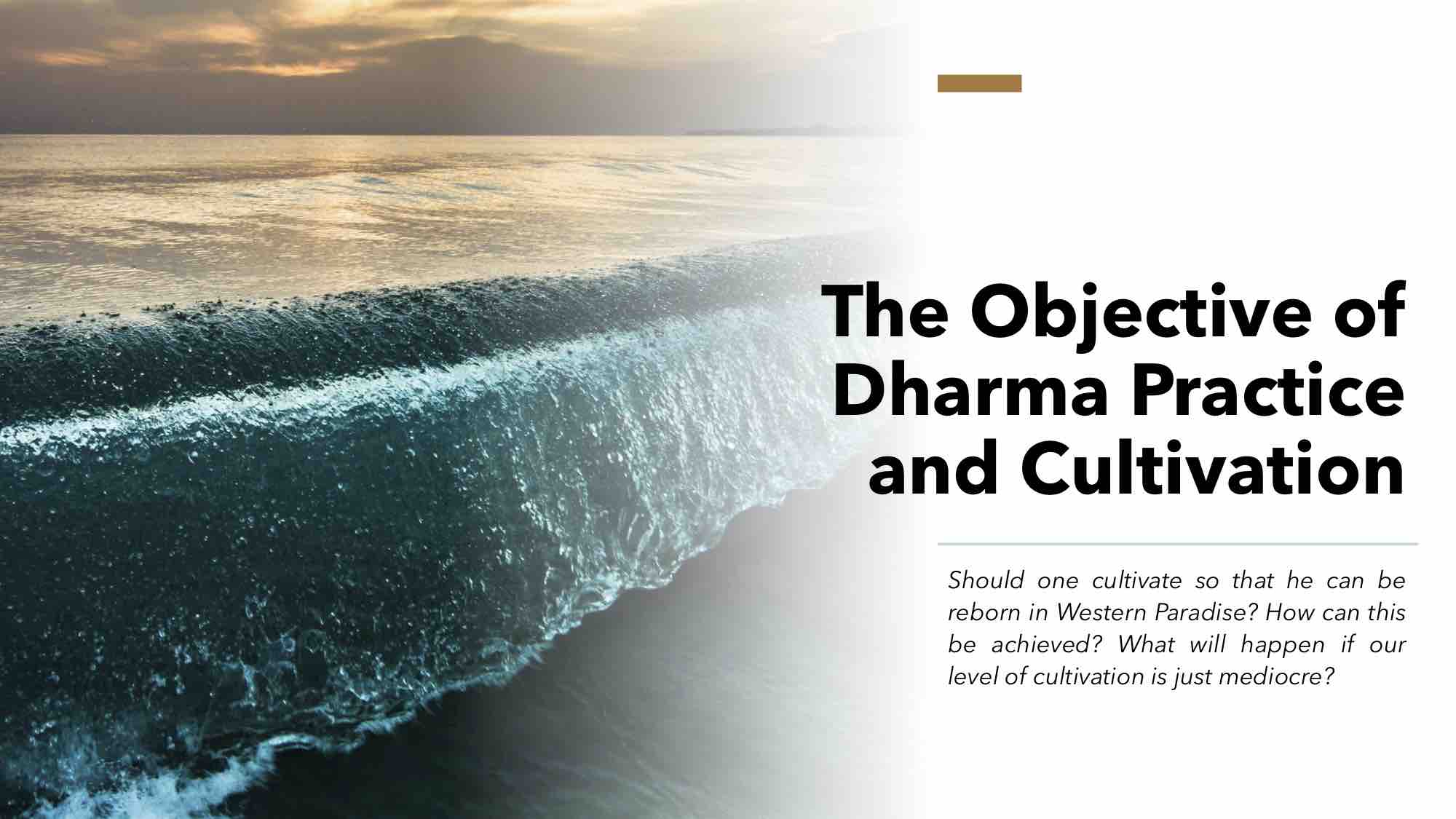 What is the purpose of Dharma practice and cultivation?

A lot of us have the answer: to attain rebirth in Western Paradise.

However, specifically, to what extent should one cultivate so that he can be reborn in Western Paradise?

How can this be achieved?

What will happen if our level of cultivation is just mediocre?

Many may not have the answers.

In fact, to attain rebirth in Western Paradise is a very lofty aspiration and thus not easily achievable. Citing a familiar example, a person will be put through an assessment that determines the path along which his soul travels after death, whether to the Netherworld or Hell, Heaven or Western Paradise.

Dharma practice and cultivation are akin to the preparation for university admission tests. Likewise, seeking rebirth in Western Paradise is similar to seeking admission into the world’s most prestigious universities like Harvard and Oxford. This is extremely difficult for most people. A more realistic goal would therefore be the domestically renowned universities, ordinary national universities and provincial universities, etc. which mirror Heaven, Asura and the Human realm, respectively. While persevering in our pursuit towards the highest goal, we should set our sights on the more realistic one – Heaven. The higher the level one is able to attain within the 33 levels of Heaven, the longer he will be able to remain; the closer to the Human realm, the more likely he will descend to the lower realms. Thus, each and every one of us must strive to ascend to a higher level in Heaven.

Many people recite the sacred name of Amitabha Buddha in the hopes of ascending to Western Pure Land of Ultimate Bliss. On their deathbed, they believe that by doing this, they will be welcomed and escorted by Buddha Amitabha. However, if their spirit has freed itself from their body prior to their death, leaving them unable to speak or think and without a single intuition, do you think Amitabha Buddha recitation will still be possible at times like this?

Buddhas and Bodhisattvas asserted that there are some conditions to Amitabha Buddha recitation at one’s deathbed – that is, during these final moments, one generally needs to be joyous, have no karmic debts or sickness. Typically, it is only under such circumstances that one is able to ascend to Western Pure Land of Ultimate Bliss upon recitation of the sacred name of Buddha Amitabha.

If one has committed a lot of unwholesome deeds and is weighed down by hefty karmic obstacles and debts that have yet to be cleared, do you think they can ascend to Pure Land by a simple recitation of Buddha’s name? If that becomes possible, it will be an absolute contradiction to the law of causality. The practice of Guan Yin Citta aims to eliminate our karmic obstacles and clear our karmic debts as only then, we are able to return ‘home’ (by ‘home’ it means Buddha land). Hence, it is stated (in the Amitabha Sutra): “One cannot be born in Pure Land through minor wholesome roots, blessings, virtues and causal connections.”

The teachings propagated by Guan Yin Citta is the Dharma of the human world where it provides guidance on how to resolve the many difficulties in one’s life. Through the Three Golden Buddhist Practices of performing recitation of Buddhist scriptures, making great vows and performing life liberation, it makes the eradication of karmic obstacles, repayment of karmic debts and elimination of one’s  worries and illnesses possible. Through studying ‘Buddhism in Plain Terms’, it leads one on the path of cultivation of mind and conduct, alleviating their state of mind and ultimately helping them break away from the Six Realm of Rebirth to return to Western Paradise and the Four Sagely Realms.

< Buddhism: Your Questions Answered
« WHY PRACTISE BUDDHISM?
WHAT IS KARMIC OBSTACLE? »